In San Romano there was only the small elementary school that served the very tiny school population. The school age children only amounted to less than a dozen, grades first to fifth.

I wanted to become an engineer or architect and there existed no opportunity for me in San Romano.
After I  finished fifth grade, very successfully, I actually repeated fifth grade the following year and became the teacher’s assistant.  I remember reading all the books in the small library and also reading all the books our village priest had in his church-home office.

I was about 13 years old and since many  of our friends and relatives had immigrated to Chicago, we decided to also immigrate as a family.

My father started the paperwork and we were told it would take several years to obtain our visas and it was not a 100% certainty we would be granted the visas.

My father, at great sacrifice to himself financially decided to send  me to a private boarding school in Lucca, our nearest city.
I went there with Aldo who also wanted to excel in higher education. The school was an old monastery inside the Lucca walls. This medieval structure had no heating system nor cooling.

The classroom was always cold and most of the students always wore heavy coats and even gloves. It was very difficult concentrating on the subject matter while freezing.
The boarding arrangements were even worse. We bunked in a large room filled with 15 to 20 beds and basically had minimum to no privacy.

The subjects were very extensive. I believe I had 17 required subjects. In Italy, the higher education system is very difficult and strict. Regardless of your focused trade or profession, the first 2 to 3 years we were required to take all the subject  assigned including music, history, various math, languages, and many others.
Here the teacher specialized in the specific subject came to our classroom, the teachers rotated, not the students has is common here in high school and college.

Since this was a private boarding school run by friars, there were many city children with huge problems, the reason parents stuck them here.

There were always fights and issues that created disruptions in classrooms and on the grounds.
One group from Rome was in the market of selling cigarettes. They had American menthol. They would give each student two free cigarettes to try out. We would take turns in the bathrooms to try out the cigarettes. When I was given my two, I went into the bathroom and carefully made sure no one was there, I then lit and tried the first cigarette. The experience was very unpleasant and after several puffs I made the decision that this was ridiculous and flushed the rest in the toilet.
Once out, I was asked for an order and how many cigarettes I would be buying. I told the student in charge that I did not intend to smoke and I would not be buying any.

This did not sit well with the group; the next evening I was cornered by three guys and beaten to a pulp.

That was the end of it, I had been given a lesson and other students better watch out or the same faith awaited them.

Since on weekends I would not go home, a family that was very good friend with my father and uncle, would take me in on Sunday. We had school on Saturday.
I remember taking a real bath in a real bathtub for the first time in my life here at the house of this well to do family who lived in Lucca. They took me to movies and shopping, it was very much fun and everything was new for me then. Coming from a very small rural village, my home had no basic utilities.

This was 1961 and the winter was brutal, it rained almost every day and it was cold. I was in the infirmary constantly with some type of illness or bad cold.

Around late March, we received word that our visa paperwork was been accepted and we were sent to Genova for a full medical visit required by US immigrations.

Those were exciting times, we all passed the physicals except my father. They found a spot on his lungs and were concerned with the illness and possible spread of germs if contagious. This is really the only criteria they had. Immigration wanted to make sure we were not contagious with any communicable disease like TB.

My father had to continue with several visits until Immigration was  satisfied that  it was  not TB and safe to come into the USA.

I remember well when we went to the city to take our family and individual passport photographs; the expectation and anticipation of traveling to America was incredible.

Finally, one day in mid-April, my parents came to Lucca to pack me up and take me out of school just a month before my first completed year.

From that day forward the adventure became a daily routine I looked forward each day.

since in 1962 airline jets were yet  not regular flights and were just  emerging  in the travel scene, my family  decided to travel to New York by ship.
I helped my father  with all the details and arrangements. I went with him to purchase the one way tickets. I remember the cost been a bit over $1,100.
He purchased five one way second class tickets on the brand  new Christopher Columbus ship..
The ship had just been set to sea along with a sister ship, the Leonardo Da Vinci. These two ships were built by the Italian maritime industry as a copy to the wonderful Andrea Doria that sank in 1956.
The reason for five tickets included the one for my grandmother Carmela. She had been in America from 1900 to 1905 and went back to Italy, San Romano. After her family children all slowly immigrated and my mother was her youngest child and since she lived with us in San Romano, she decided to come with us.

Packing was an adventure, I took many books and mementos. By ship we had much more room to pack then on a plane.
We were taken to Genova by our cousin and boarded on May 5th, 1962.
The ship was the most beautiful structure I had ever seen. We were in second class, but were given tours of first class just to see how they travel.
Once we sailed, the ship went along the French Riviera, it was spectacular!
We docked once by Nice then on to Naples and the strait of Gibraltar.
The water was smooth as silk and the views were wonderful. I learned how to play ping pong and played every day.

Once in Gibraltar, we set anchor at the rock. Merchants came by to sell trinkets, it was all new to me.
We then sailed toward the Azores Islands. This was our last stop before crossing the vast Atlantic.

The unexpected then happened, the sea became violent and I along with my family, became very much sea sick.
The crossing was hard, the trip took nine days. The Atlantic was not fun.

On May 14th very early in the morning we received an announcement over the PA system that we were approaching the New York harbor and to come on deck to see the skyline.
I remember dressing quickly and climbing up to the highest deck level. Low fog surrounded the higher parts of the ship and visibility was poor. My brother and I waited and looked carefully to see the famous skyline but what we saw in the next few minutes has been forever burned into my memory. Has the ship slowly advanced into the New York harbor, the fog  dissipated a bit and to our amazement, the statue of liberty appeared just to the left of us. It was the very first structure we saw surrounded in fog at the lower extremities, the face and torch stood out valiant telling us: “welcome”. I am actually in tears remembering and writing this now. 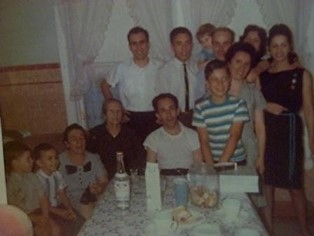 Here is a picture taken in our very first apartment in Cicero,IL. circa 1962. From left to right we have:

Chuck Jr, Loriano, my aunt Eni, my grandmother Carmela (in black) Standing is Bartolo, then me, the little girl is Vicky, the guy seated in front with a white T shirt is my dad Arturo, very skinny here, next to him is my younger brother Sergio, next to him my mom, Maria, behind her is Chuck & his wife Lelia and the last one to the far right is my cousin Quinta.