San Romano is approximately elevation of 500 meters above sea level, about 1,500 ft. At this level, we would usually get snow in the winter. As a young child, it was always a great occasion to see snow. Since most of all villagers worked the fields and the surroundings areas, when snow fell everything stopped.

Along the road from the main church to the church of San Rocco at the end of the town, there is a very nice change in elevation where the road dips down to the main piazza at the San Rocco church in a straight line and then it gradually slopes back up along the church wall where it continues into the opposite hills of the village.

This was the place for all of the young people and children to congregate and construct the village “strugiorella” meaning “The Slide”.

Here all young men would come and accumulate the snow along the side of the road. We would pile the snow as high as possible and work our way down the slope of the road to the other side along the San Rocco church. Once we had enough snow, the most able men would use a long wood board to create the actual “strugiorella” track. They would go over and over until the track was perfect. Then that very evening they would pour water on the track so that during the night it would freeze into ice, making the surface very smooth and fast.

My brother Sergio along with cousins Donato and Egidio would get up the next morning ready to slide down the village “strugiorella”.

At the lower level of our house, in the cantina, we kept our best wood boards. The designated “strugiorella” board was about 5 feet long and approximately 10 to 12 inches wide. The track was usually set at around 12 inches.

With board under arm, we would run to the upper location and get in line for our slide down. Along the slide course some of the teen boys and some of the dads would monitor the ride.

Usually, with the previous evening iced procedure, the slide would move extremely fast. The faster it was the more fun for us. Speed was always measured on how far your board would go up along the wall of San Rocco church since at this point the road would start to ascend up toward the hills. The trick was to stay in control once we reached our stopping point and the board would then slide backward down to the flat area of the piazza. We would usually scream going down backward, but always with great fun. Here the people in supervision would help you dismount and signal for a new slider to start down. Most of the sliders would pair up on the board; the older teens would sometimes have 4 or 6 riders on a long board and that would always bring the crowd’s attention. A very heavy board on a slick solid ice surface would travel extremely fast and the girls would always scream the loudest.

My memories of life in the village are implanted with me and remind me of a simpler and yet happier life. As a young child, the village created all of my experiences.  The people involved worked and played in, or within the village. As a group, everyone pitched-in volunteering their time in building fun projects such as the “strugiorella” and many other things which I will cover later in other experiences.

The steps were very long so each one would give you a feeling of flatness. This roadway was probably the most traveled since each and every person in the village would need to collect water here on a daily basis. Our village, built in the late middle Ages, had no plumbing and no running water in the homes. Our source of water was the village fountain. Spring water from an upper spring above the village was piped to the fountain and here water would flow continuously out of four brass nozzles installed in a rock wall. From here the water would flow out and down to a nearby stream.

To the right of the nozzles was a covered building open on all four sides. Under the roof of this building were two rectangular man-made concrete and stone ponds. The larger pond was used for washing clothes and the smaller pond for rinsing. This location was the village source of all gossip. Women would line up along the large pond and wash and beat the clothes on the stone slanted face, over and over. They would then move to the rinsing pond and use the same procedures for the final rinse. Once finished, they would place the washed clothes in their basked and carry the load home to be placed on a wire to dry.

Something should be said about how women carried water or these baskets of clothes around; the method has always intrigued me.

They would take a dry towel, fold it, and make it into an exact or nearly exact circle. This circled towel would then be placed on their head and the bucket of water or clothes would go on top of it. The women would then walk home with their water bucket full, without spilling a drop, or carried the basket of washed clothes. What astounded me was the fact that they would do this without ever using their hands. Once the load was placed on their head, it simply stayed there no matter how fast or slow or talking or whatever went on with them. This was done only by women and there must have been a special time where moms would teach their daughters this art. I never knew since our family consisted of two boys.

My job was to carry two fresh bucket of water home each morning for the day use. I would carry the aluminum buckets by their handle and not on my head. I had no such skill. Sometimes when we used a smaller aluminum bucket, I would play this trick, fill it with water, and then spin it by the handle to see if I could keep the water from spilling.  On several occasions I ended up breaking the handle and also getting in trouble for this.

During the time the “strugiorella” was in use, sometimes we would lose control, jump off track and slide all the way down to the fountain. Since the road was made of wide terraced stone steps, the wood board would air-born at each step creating a fun thrilled experience. The problem was stopping since at the bottom of the road were the concrete-stone ponds and inevitably we would hit the wall with the wood board. This was the reason the ‘strugiorella’ ride was always monitored along the track. We always got in trouble when riding alone.

I was so taken by the ride down to the fountain that I decided to make a sled so I could use it in our terraced hills and glide in the air at each terraced jump.

The task of making a sled from scratch became a lot bigger than I had anticipated. Over the next several months I looked for the right tree with the proper curvature at the end in order to make a really cool sled. I wanted the front to curve up so it would glide along any possible obstacle and not get impaled in the snow.

Finally one day I found the exact tree. It curved off the ground and then it stood straight for a good 6 or 7 feet, it was just the right size for my purpose.

I cut the tree at the very base in order to preserve the initial curve, and then cut off the part I didn’t need, and took the trunk home. Here my job became very difficult when I tried to cut the tree in two exact halves. The tools available to me were all of the tools my dad owned. In the village all of our tools were non-electric and our larger saws needed two people to pull. My cousin Donato was my best friend and the two of us were inseparable. He was one year younger than me so I was basically in charge of any project or adventure we embarked on.

He helped with the sled and eventually we finished our project. The finish product looked good; it was about 5 feet long and maybe 3 ft wide. The two halves of the sled looked perfectly even and were held together by flat wood boards from side to side. We had this idea to cut the curved piece of the sled right at the base and bolt on each side. We then drilled holes at the top of the circle and attached ropes at each side. This gave us steering ability and it actually worked. I was extremely proud of my sled and all I had to do was wait for snow.

Next winter seemed like an eternity; but we finally got our first snow. My cousin and I took the sled on the opposite hill of the village fountain. This was the steepest terraced hill we knew and it had a long cleared section without trees.

I placed the sled at the very top and asked my cousin to join me; he decided to watch me for the first ride. So I climbed on and holding on to the steering ropes, I let the sled go down the steep terraced embankment.

The ride was better than I expected and on each terraced jump, the sled would air born. I had to work the ropes has hard as I could to avoid a large tree at the bottom of the hill.

That day, Donato and I played in the snow with our sled and came home in one piece. Unfortunately, for that year, it was the only snow we ever saw in the village. Winter was mild and for the next 2 or 3 years there was not enough snow to make a “strugiorella” or to use our sled.

I was telling this story to my father the other day; he lives in Chicago and we do talk on a daily basis. He started laughing and reminded me that after that first year, I never did use the sled again. We didn’t have enough snow and later we moved to America.

This is the Church of San Rocco in San Romano. The “Strugiorella” ended here. 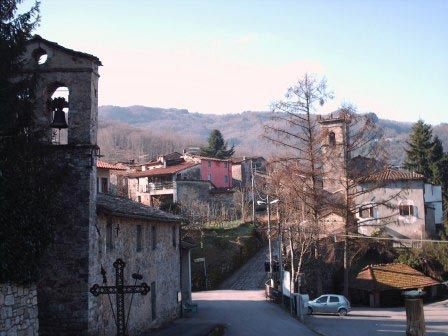